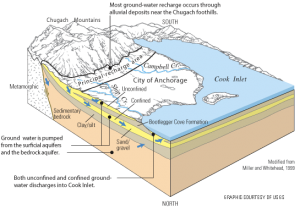 Understanding water well basics begin with understanding groundwater. Groundwater is water in the subsurface that fills the pore spaces between sands and gravel or fractures in rock formations. In many areas it is a source of water supply for municipal, agriculture, commercial, industrial and domestic uses. The simplified diagram below illustrates how rainfall infiltrates through the unsaturated soils to recharge the upper aquifer (the geologic materials that store and transmit groundwater). In this example, the upper aquifer is considered unconfined because there is no layer above that restricts the rise and fall of the water table (the upper surface of the saturated zone). The water table will rise and fall in response to many influences, but commonly in response to the addition of water (recharge) and the removal of water (discharge) from the aquifer.

The lower aquifer is considered confined because it is bounded by geologic materials that restrict groundwater movement. This aquifer is under pressure, referred to as artesian pressure, as indicated by the rise in water level above the confining layer in a well which develops water from the confined aquifer.

How Does a Well Work?

When a pump in a well is turned on, the water level in the borehole drops in response to the extraction of water from the well, setting up a pressure gradient between the well (low pressure) and aquifer outside the well (higher pressure). This gradient promotes water flow from the aquifer into the well from all directions to replace water being extracted. This circular depression, centered at the well, is referred to as the cone of depression.

As water continues to be pumped from the well (and the aquifer) the cone of depression will expand over time and may eventually intersect other wells, thus reducing the water levels in those boreholes. The hydraulic influence of one well upon another is referred to as hydraulic interference, and in severe cases may prevent a well user getting their customary quantity of water.

Water wells must be constructed to allow water to easily flow into the borehole from the aquifer. If not, supply problems may occur when the pump is turned on and the water level drops sharply to meet pump demand (imagine the difficulty of drawing water through a straw that is plugged).

If the water level drops to the pump intake, well production will be severely reduced. This scenario also commonly arises in wells as they age and the pathway for water flow into the borehole is reduced by build up of mineral deposits, siltation or bacterial growth.

Many groundwater supply complaints that are suspected to be caused by hydraulic interference between neighboring wells are, upon investigation, found to be reduced yields owing to a diminishment in well efficiency. Wells naturally decline in efficiency over time and periodic maintenance can help maintain well yield and prolong the life of the well.

A very important piece of information to know about your well is what is the pumping level in your well after a specified period of pumping at a known rate? Knowing this will help determine whether your well is in need of rehabilitation.